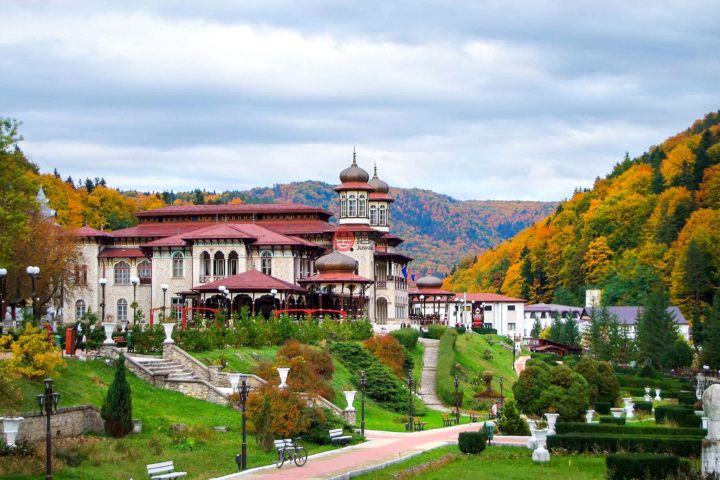 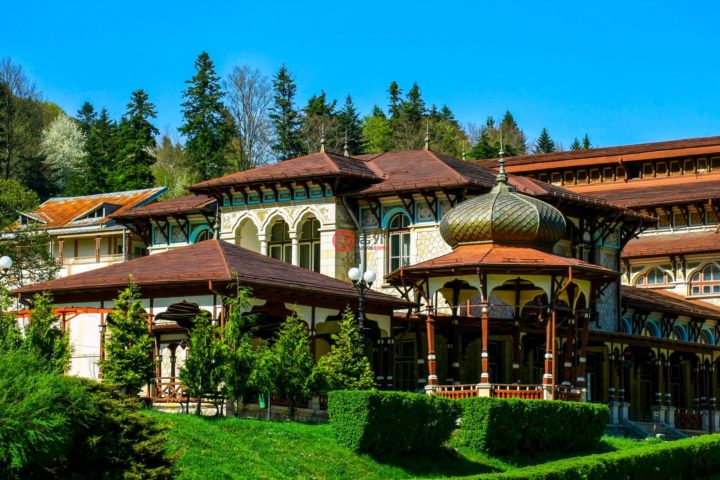 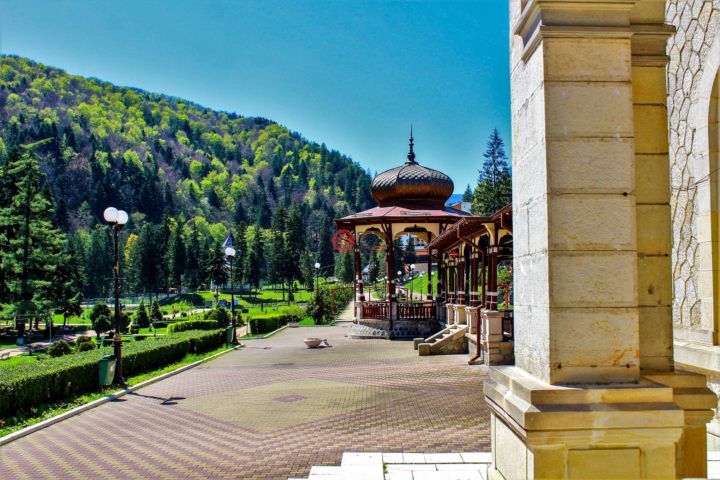 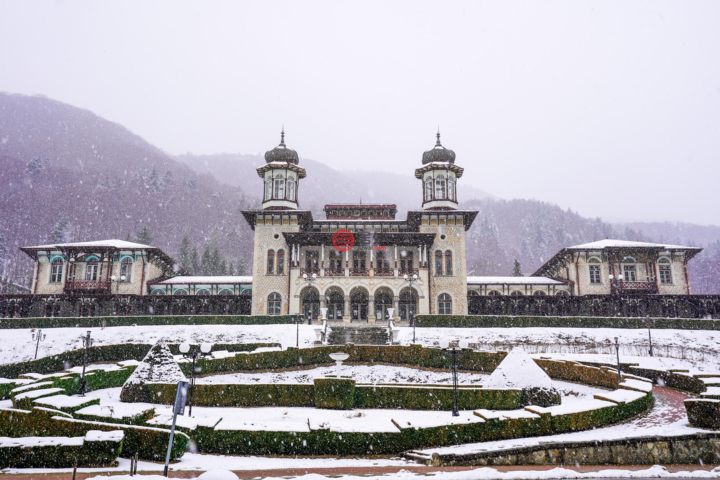 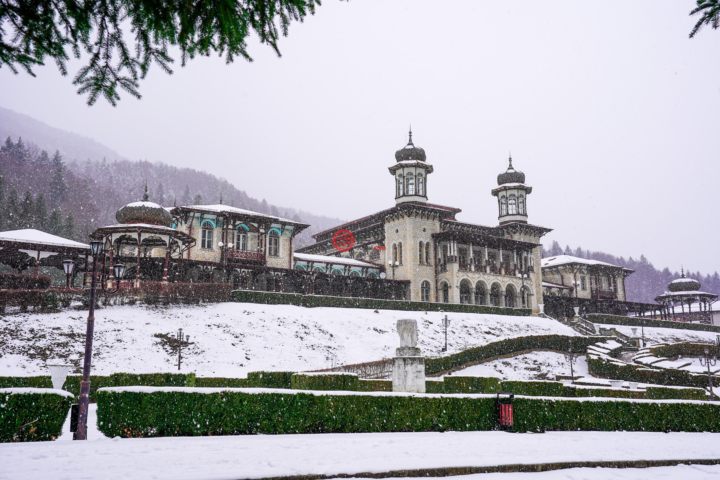 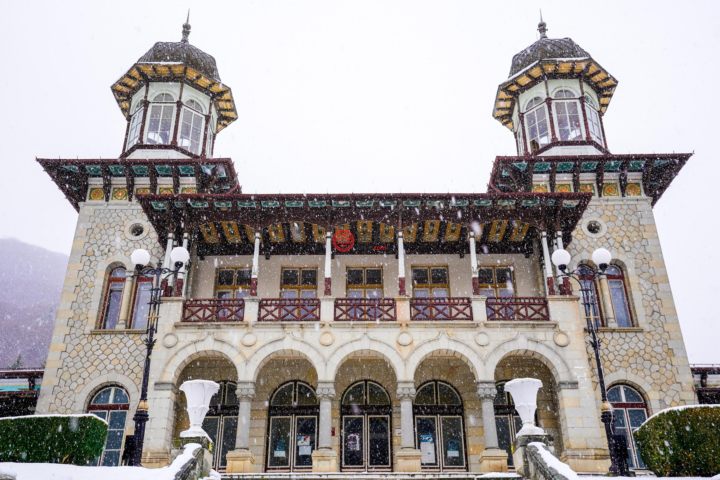 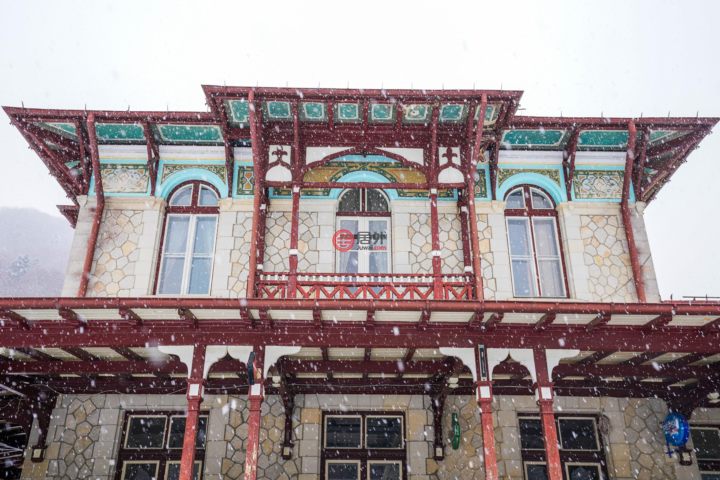 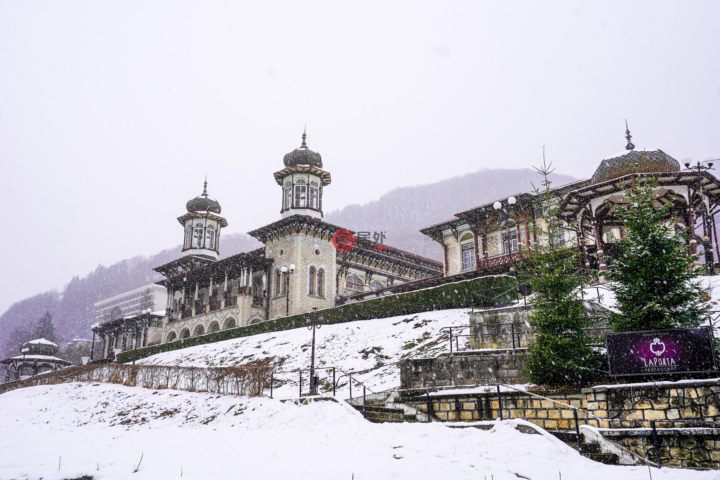 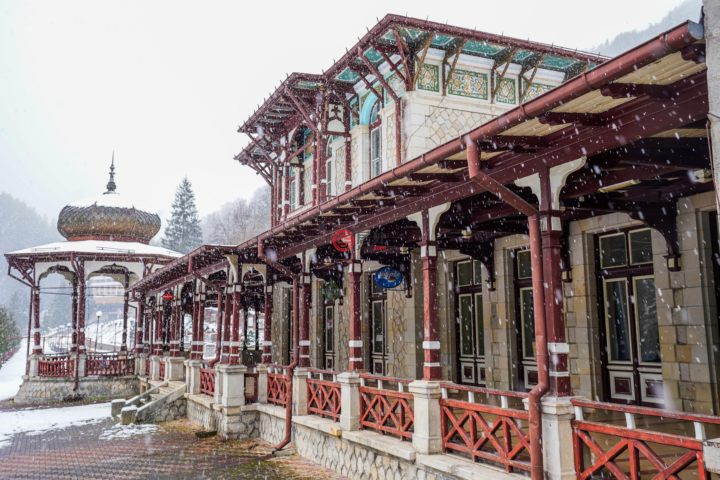 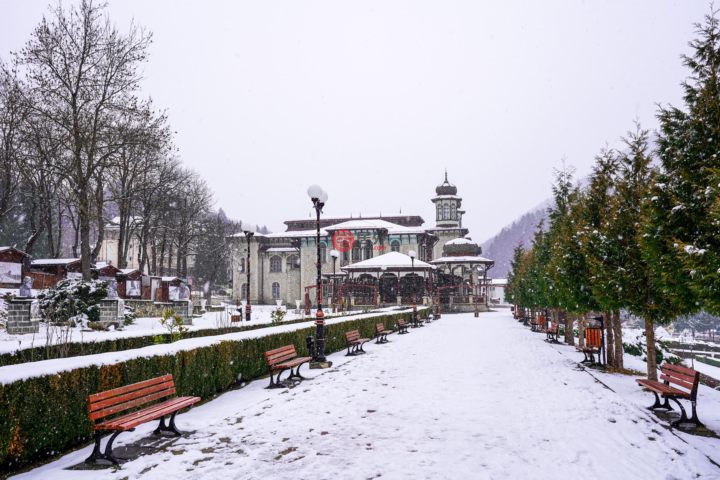 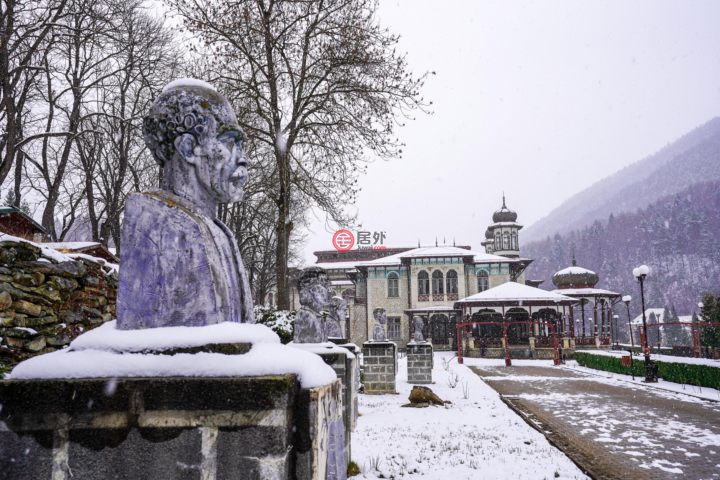 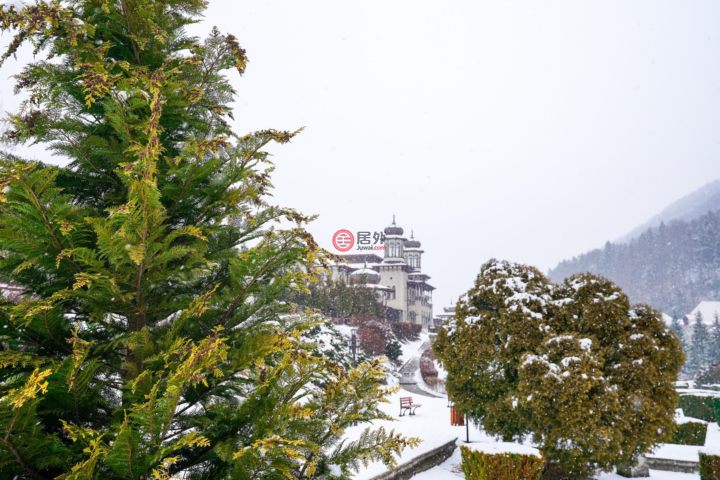 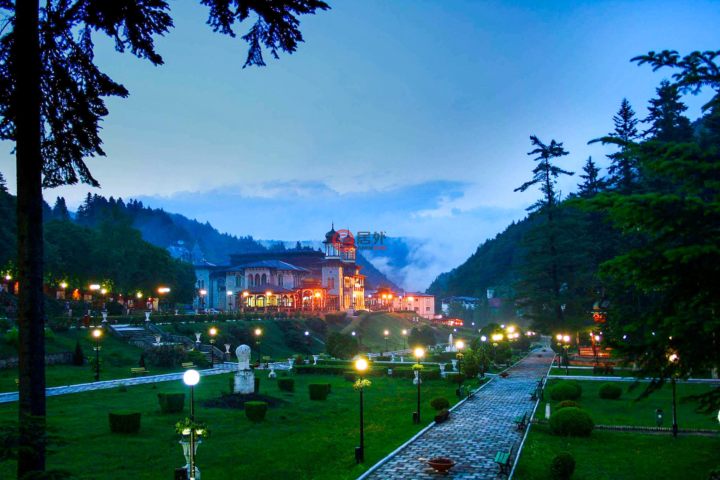 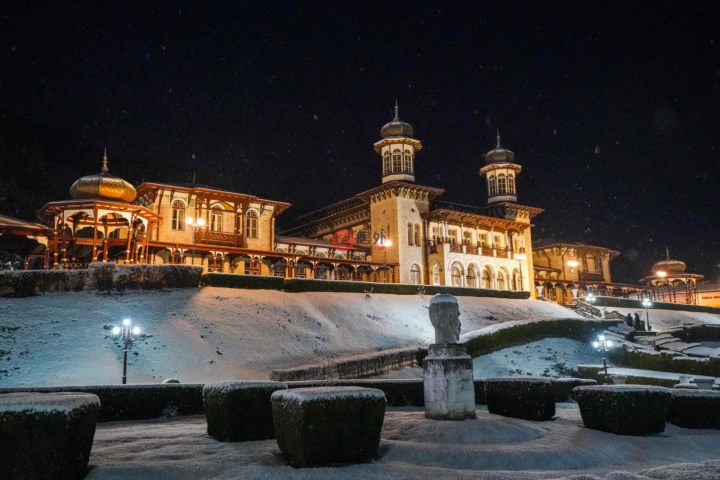 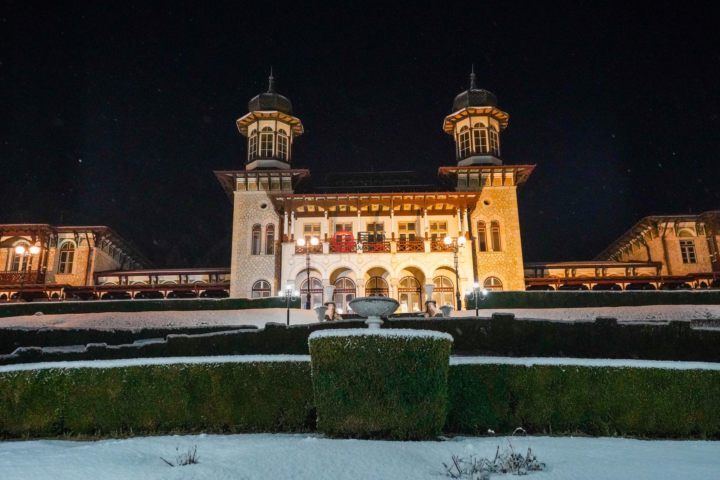 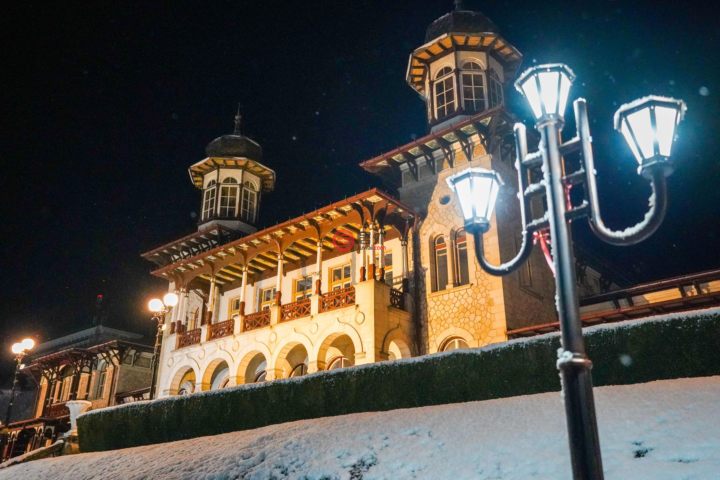 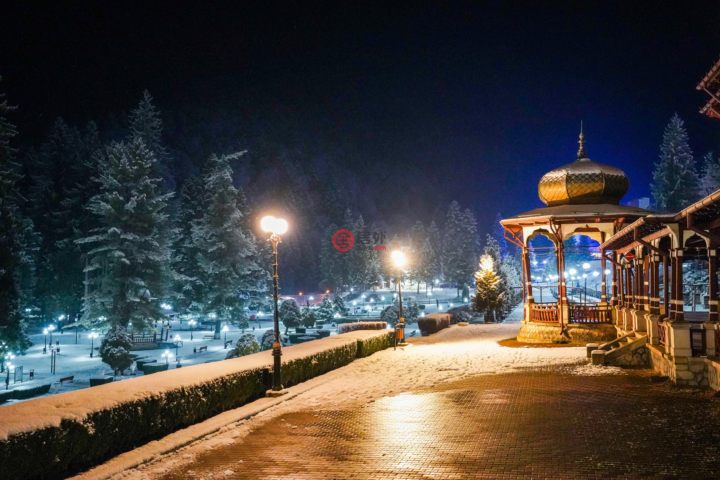 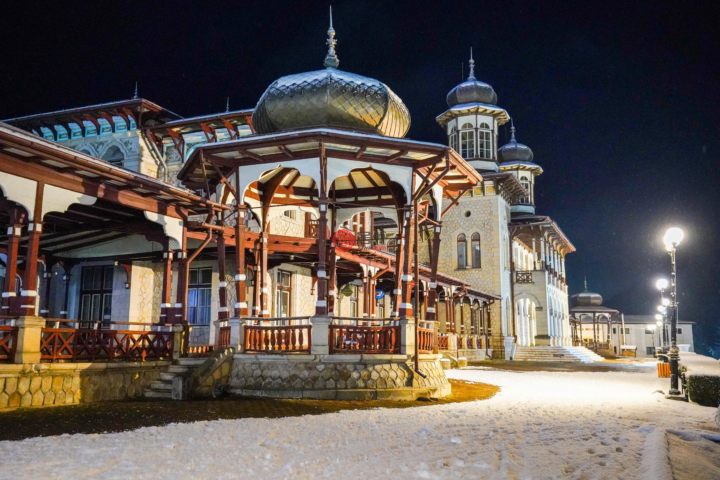 Built by Italian stonemasons following the plans of three architects (George Sterian, H. Rick and Nicolae Ghica-Budești), the casino was erected in 1892-1894, thus being the first casino in Romania. It was quickly followed by casinos in Vatra Dornei (1898), Constanța (1910) and Sinaia (1912), all part of King Carol I's strategy to develop Romanian resorts after the model of more famous ones abroad (Slănic-Moldova was compared at the time to Karlovy Vary and Vichy, its mineral springs being awarded at international exhibitions in Paris, Frankfurt, Vienna).
Although it is not an example of pure Art Nouveau, the casino in Slănic-Moldova manages to combine this dynamic and functional style with principles from other currents with surprising results. The decorative stone elements and the door and window frames come from the secular Neo-Romanian, but the towers are of Eastern religious architecture. Other elements are reminiscent of Neo-Renaissance correspondences - for example the symmetry of the composition and the painted decorative panels.
The construction is arranged horizontally on UG + GF + 1F following the rules of perfect symmetry - a main building guarded by two towers connected to two other lower-rise buildings with covered corridors that function as terraces; the long row finishes with two pavilions that resume through the round roofs the idea of the main towers.
Seen from a distance, the casino resembles a castle perched on a hillside, a slightly romantic, peaceful profile, with a discreet poetry enveloping it at dusk. In autumn, the forest in the distance lends it a bit of its leave’s auburne, winter dresses it all in white. However, from the front, it is obviously a building dedicated to community life - the platform with arched columns and a monumental stone staircase leaves no room for doubt, just as its location with the beautiful central park at the foot does not deny this either.
After decades of listening to the sound of dice, spinning roulette and French Les jeux sont faits, rien ne va plus, witnessing the making of fortunes and the dissolution of marriages, the casino became a good citizen in 1948, functioning as a House of Culture, then performance hall, city library, art gallery and other public functions. The cinema functioned in the original hall with 350 seats, which today amazes us with its two colors - the white of the walls decorated with ton sur ton woodwork and the amber of the velvety chairs and curtains. The hall is still a jewel with its shell-based lodges, lacy arches and a chandelier, unfortunately not the original one, mounted on a rich ceiling decorated with a glass skylight captive in metal embroidery.

Over time, the building has received two more terraces, a brasserie and a boarding house since 1960, and has undergone renovation and restoration work in the 1980s and 1994s and 1994s. Outside, street lamps guard the building in the typical Art Nouveau language - black wrought iron with gold accents and white glass bulbs like flower buds. Thanks to the spectacular architectural project and restoration works, the casino appears today vibrant, lively, dynamic, bold and not old or lethargic like, unfortunately, many other historical monuments of the time.

Today, the casino is looking for its visionary owner who will exploit its tourist potential and give it back that joie de vivre that positioned it at the beginning of the 19th century as a symbol of Slănic-Moldova and beyond.