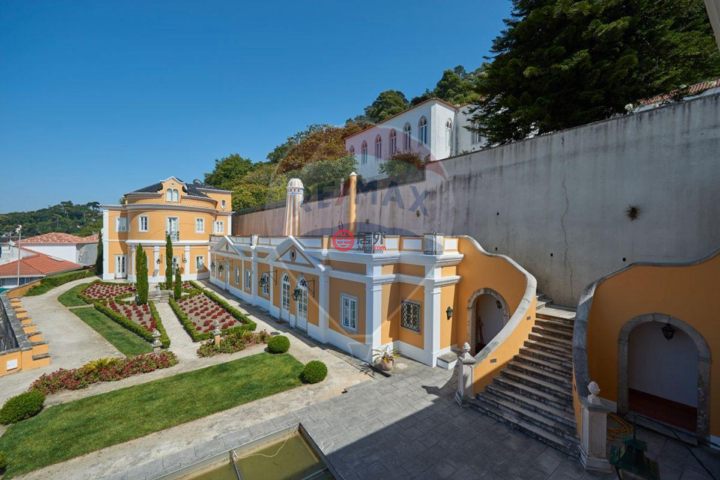 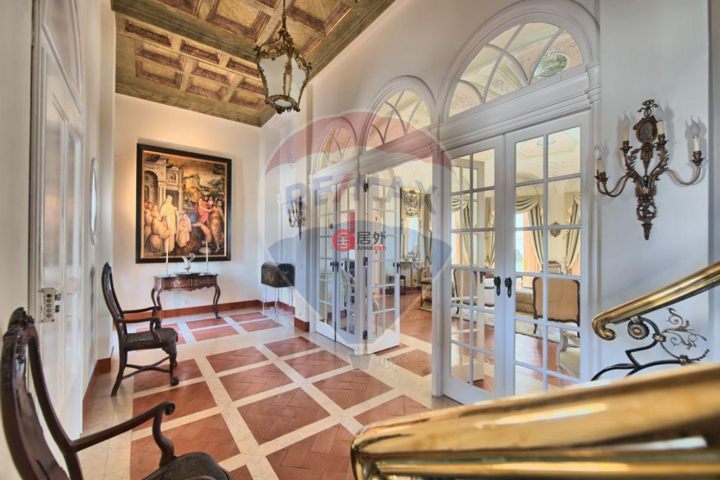 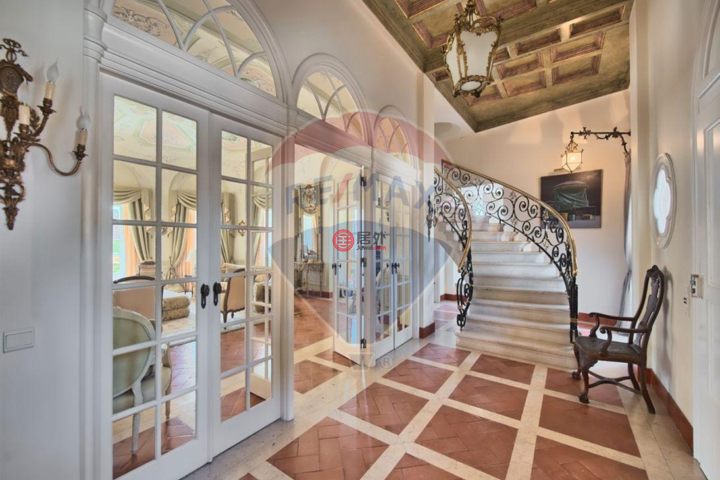 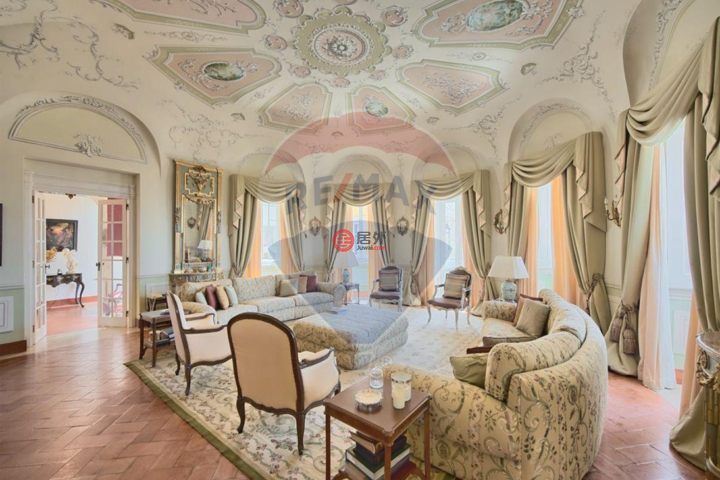 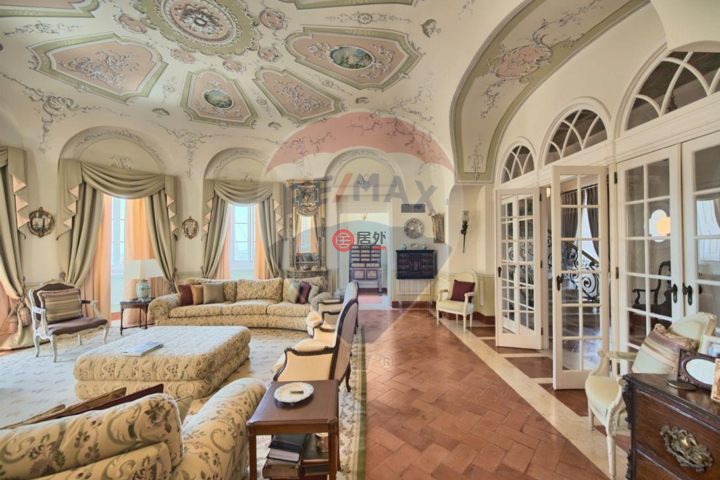 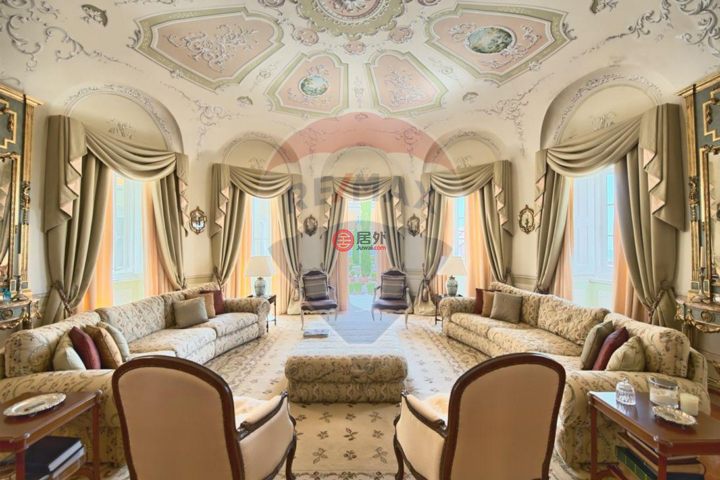 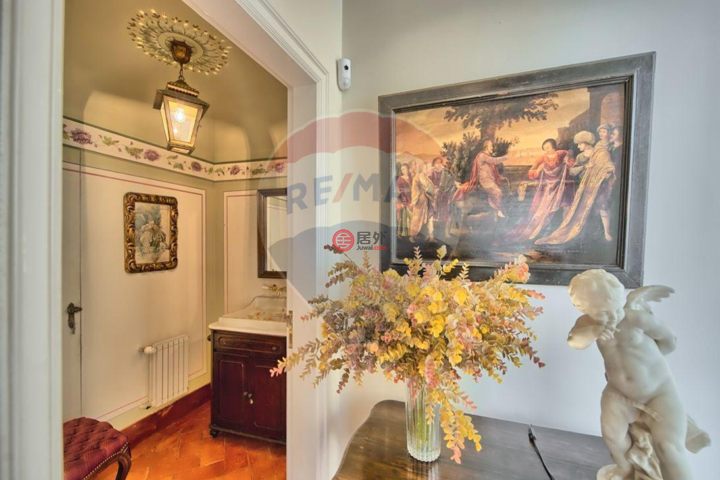 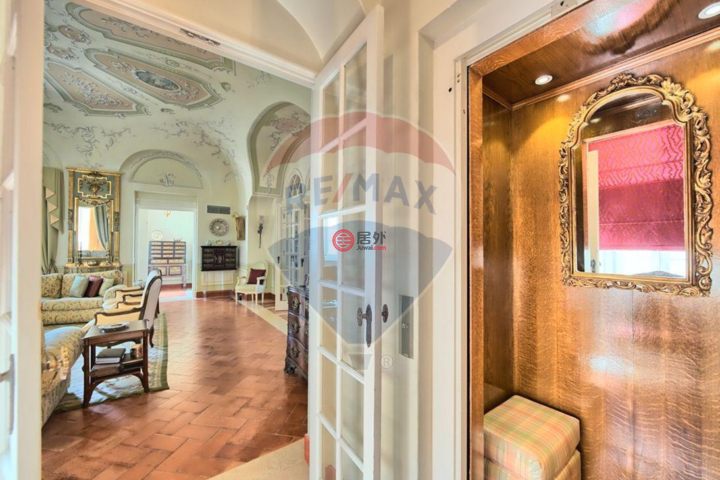 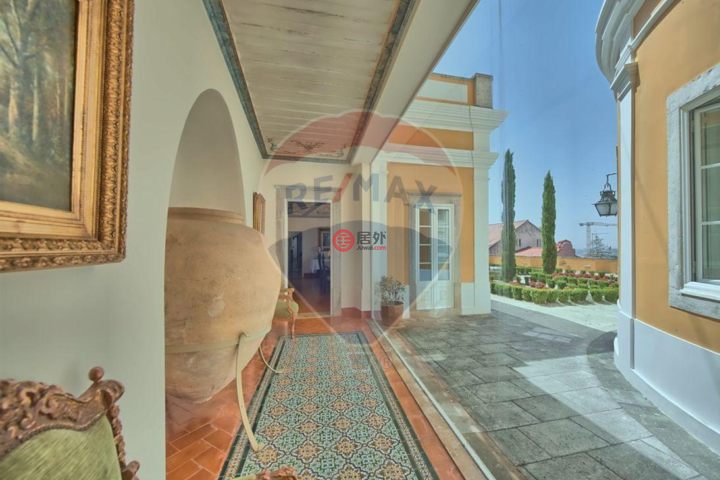 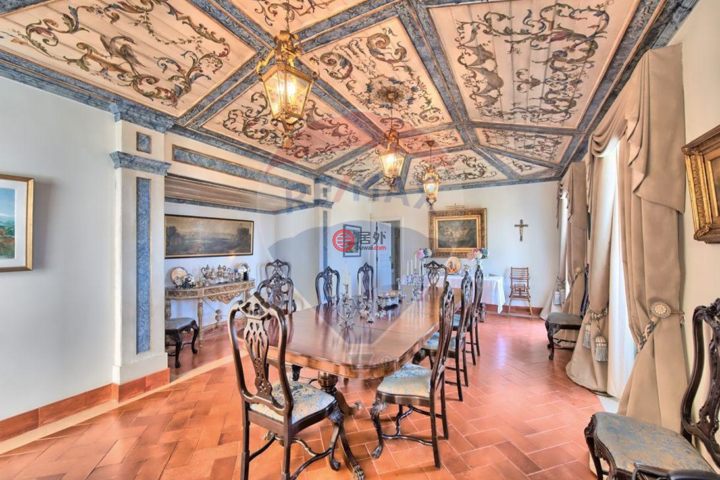 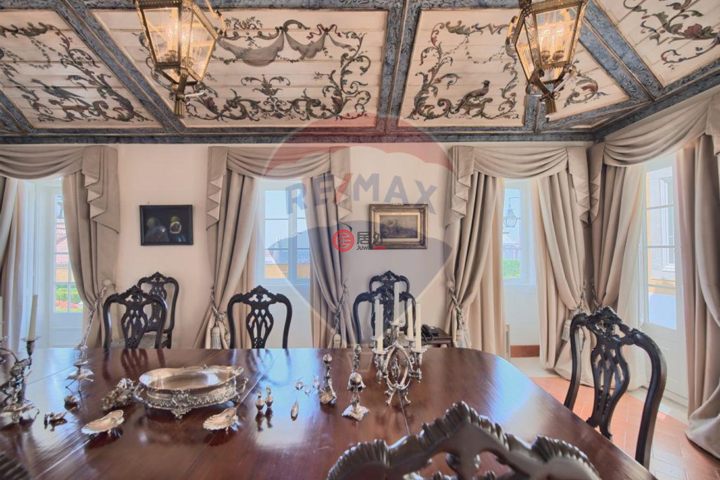 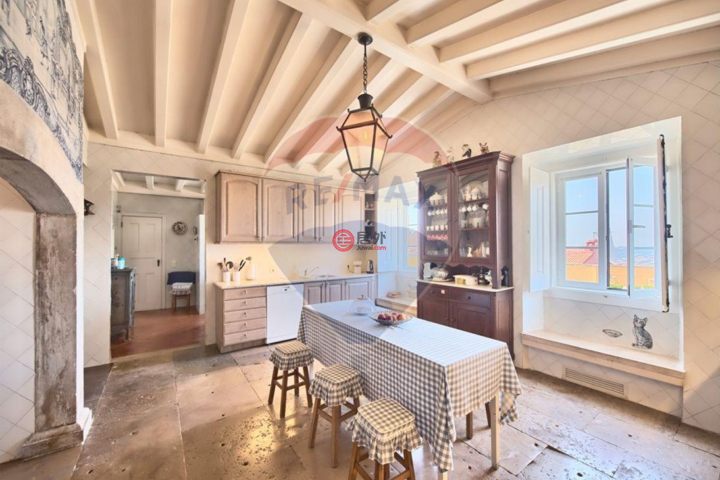 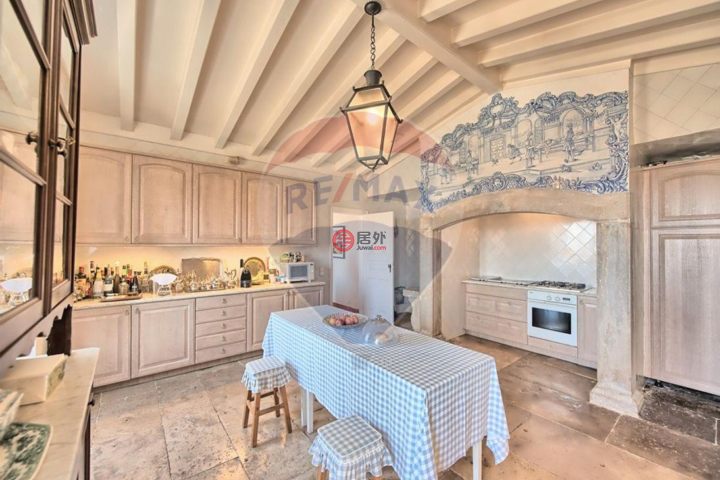 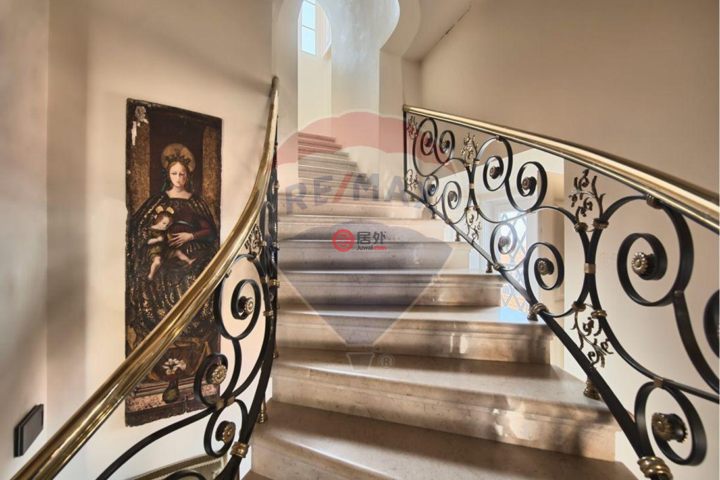 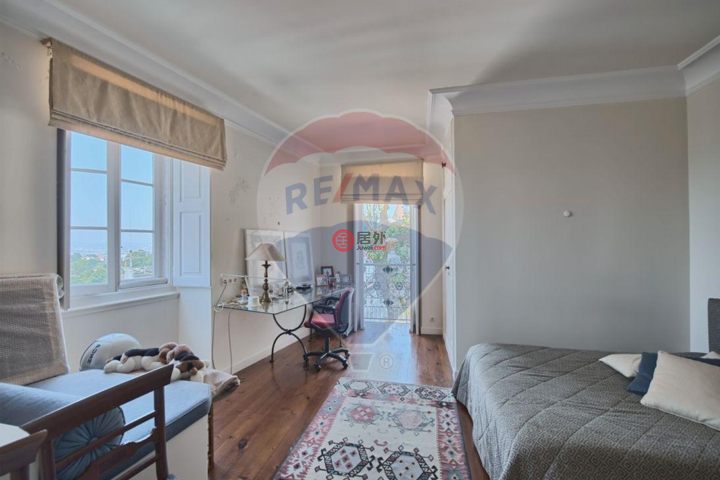 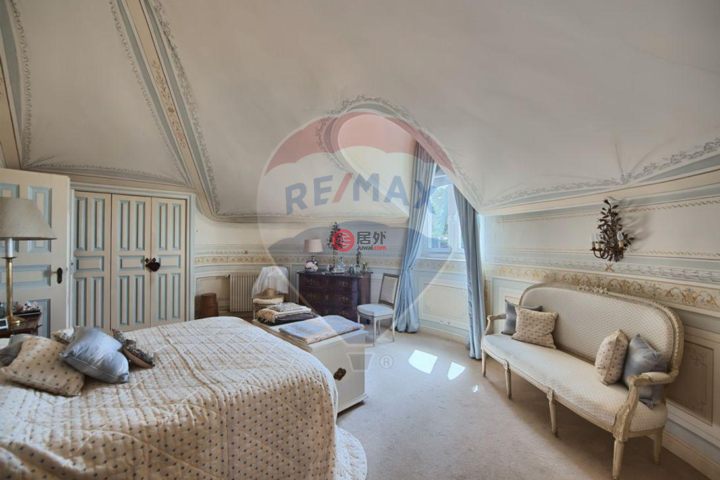 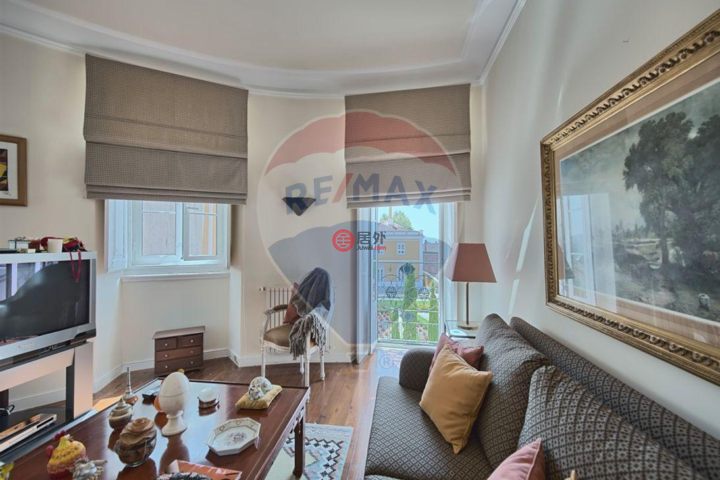 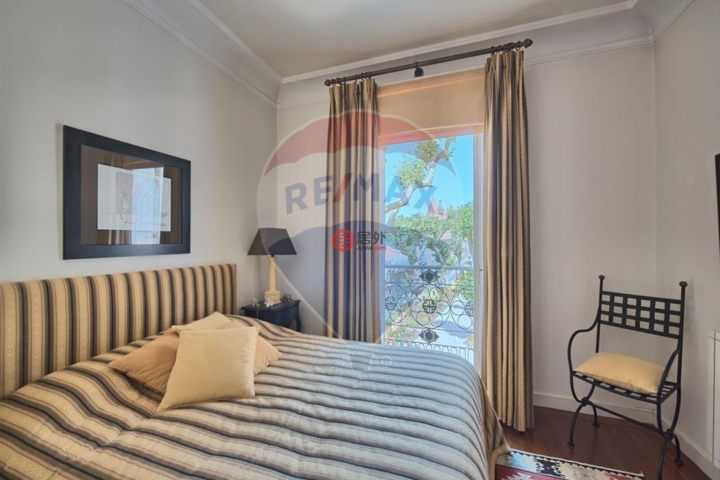 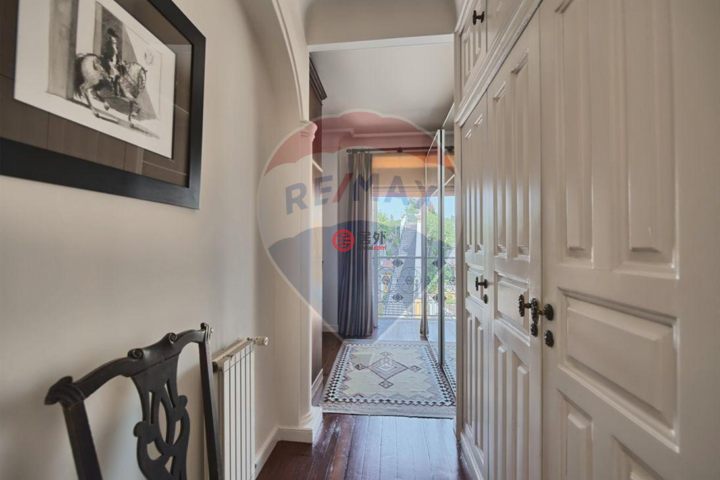 Description Palace te T11 in the historic center of Sintra. Italian House. R/ C Hall, Lounge, Elevator, Social Bathroom, Glass Corridor – Communication between the lounge and the dining room, Dining house, Kitchen, Laundry, Fireplace room, Bedroom and bathroom of the maid Corridor that moving forward gives access to: R / c entrance hall in the room, Social bathroom, 3 Suites, 1 Kitchen, 1 Corridor Terrace that goes down the stairs gives access to a technical floor and simultaneously to the garage. 1st Floor entrance hall, Living room, Social bathroom, 3 Suites, 1 Kitchen, 1 Terrace 1st Floor 3 Bedrooms, 1 bathroom, 1 Access door to an upper terrace (Solarium) 2nd Floor Master Suite consisting of: 1 Bedroom, 1 Living Room, 1 dressing room, 1 bathroom, 1 terrace. There is an intermediate floor between the garage and the ground floor with an area of 200m² that is unfinished. The garage has a capacity of 8 cars. The house has 2 entrance gates for cars and 2 pedestrians! Total construction area 1,320m² Alameda and garden 2,000m² In the 19th century the Village of Sintra is the great inspiration of the artists and writers of the Romantica chain. what attracts more and more the Nobility and the Bourgeoisie of the time and consequently are built Palaces, Lordly Houses and chalets At that time is built one of the most prestigious farms The QUINTA DO SALDANHA which is part of the History of the Village of Sintra The farm is built in the year 1830 by the Marquis of Saldanha maternal grandson of the Marquis of Pombal prime minister of King D. José The farm is built on the scalco of the Serra and in the shadow of the Moorish Castle with a privileged view over the National Palace of Sintra On this farm are built two houses one in the highest part and the other at a lower level destined to the first for housing marques and the second for his mother A of his mother was named Casa Italiana because it was designed by an Italian Architect of great prestige having this elaborated a project of a semicircular building and where Italian workers and artists were employed to paint the frescoes both outside and in the interior Around 1840 the Marquis of Saldanha was appointed Ambassador to London where he remained for a few years having some Historians considered his going as a golden exile of end of career At that time the Fifth was sold to an English family The Italian House returned to the possession of the descendants of the mother of the Duke of Saldanha who was the daughter of the first Marquesde of Pombal for her second marriage to D. Ernestine Wolfange Countess of Daun –Austria- member of one of the most illustrious vienna families of Austria The Italian House has on the roof of its entry portico a Coat of arms with the painted arms of the daughter –The Countess of Rio Maior - D. Amália de Carvalho Daun and Lorena de Saldanha Oliveira e Sousa The Coat of Arms has a coat of arms Aguia with a wrench that comes from the Daun Arms and symbolizes the story that the first Count of Daun was arrested by a rival and imprisoned in a Tower of a Bohemia Castle. The friends so that he could escape domesticated an Aguia teaching her to fly with a key in the beak to the window of the tower and so the Count can open the prison door and escape The Tower represents Saldanha The Arches- Oliveira Armas de Portugal –Sousa Estrela –Carvalho Grade-Lorena Still in the possession of the Countess of Rio Maior the Italian House was Inhabited by several illustrious personalities such as the Duke of wellington the manperrin family the great Industrial Portugues Alfredo da Silva At the beginning of the 20th century the Italian House is once again inhabited by the Saldanha Family who donates the highest house as part of the Quinta to the Patriarchate of Lisbon and sells the ITALIAN HOUSE to a family that inhabits it for a few years until December 1987 That month and year the Italian House is sold to the current owner and for two years restoration works are made both outside as well as inside.