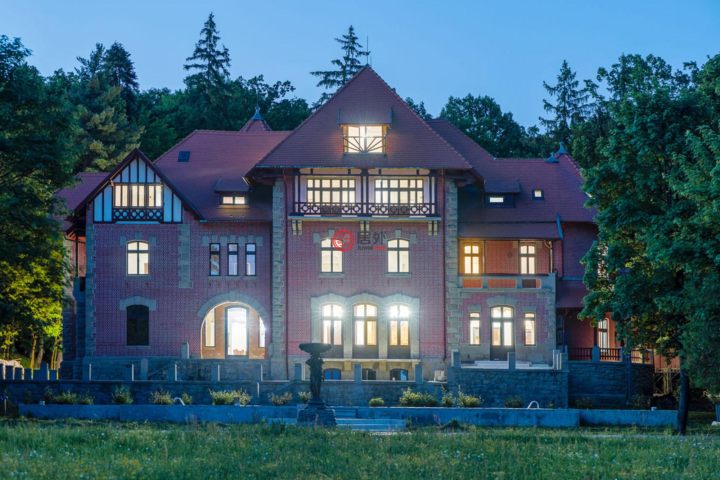 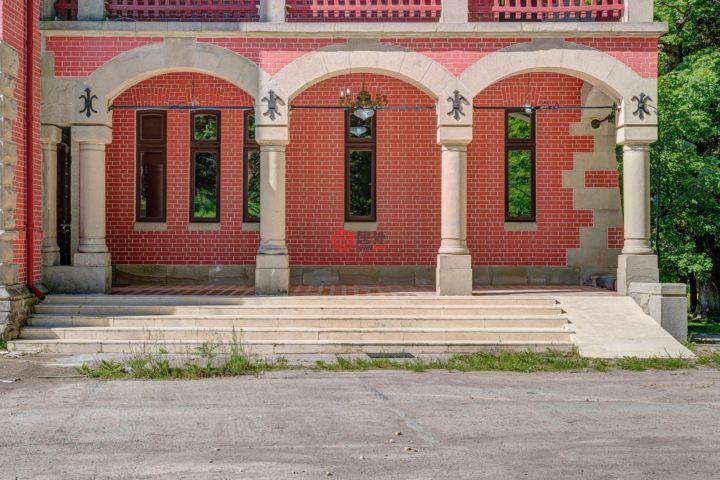 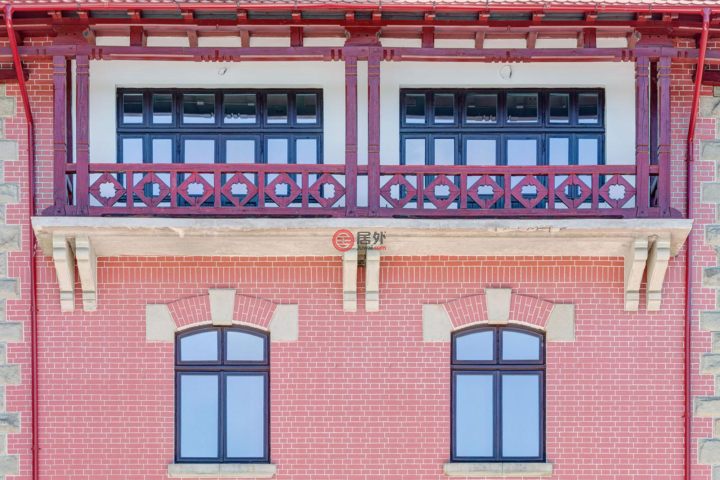 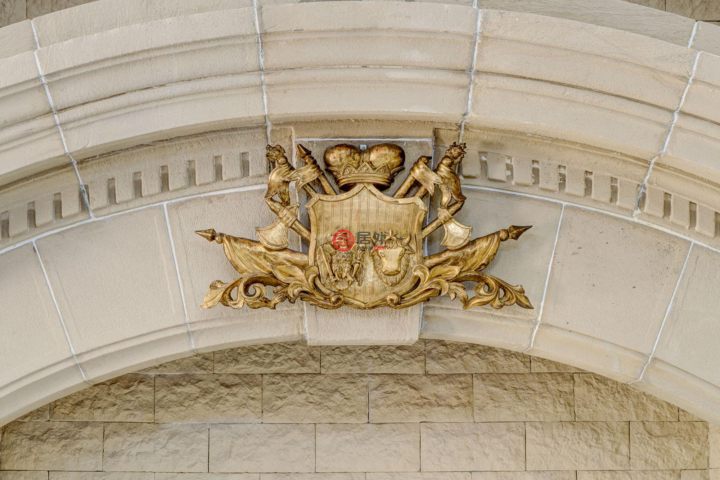 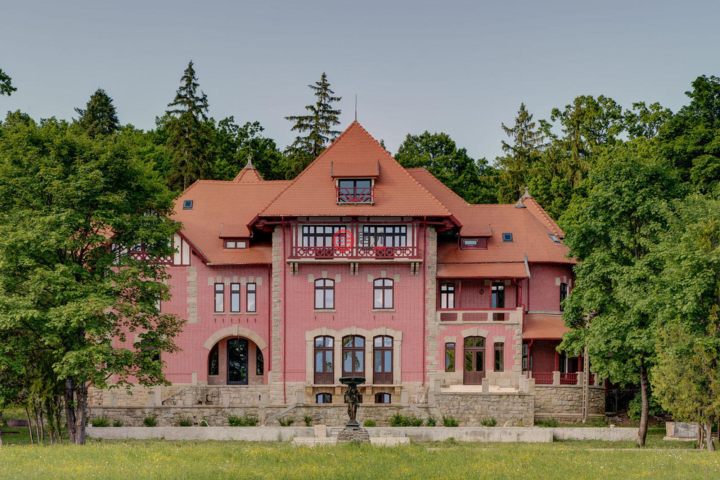 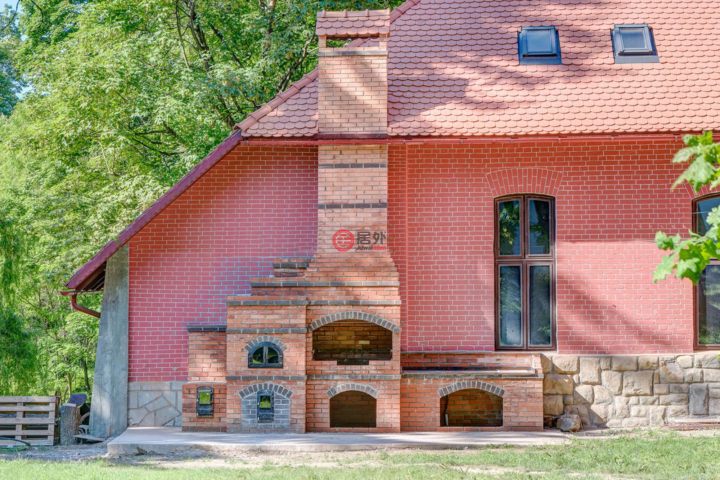 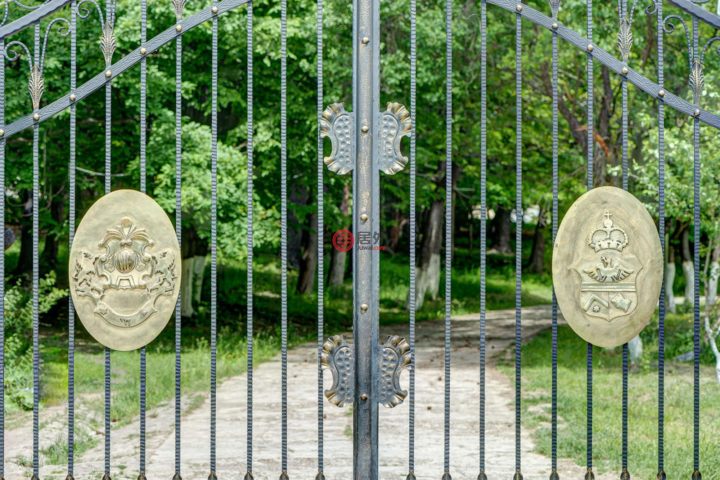 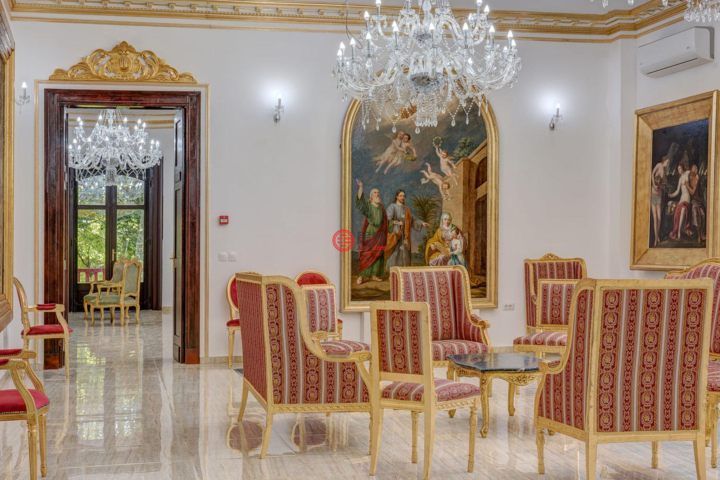 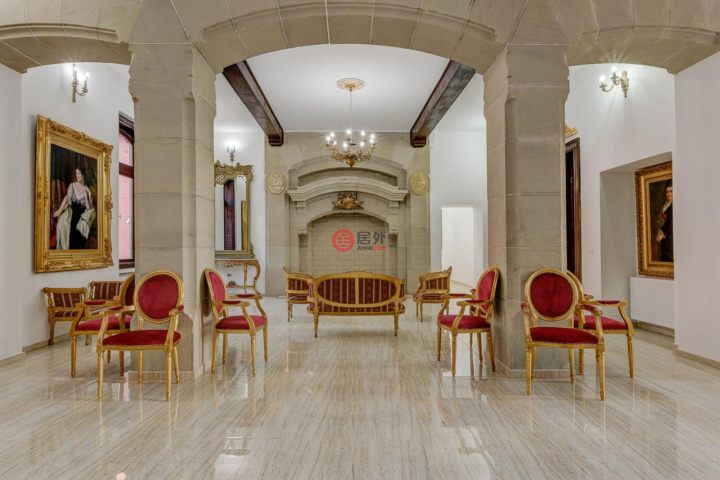 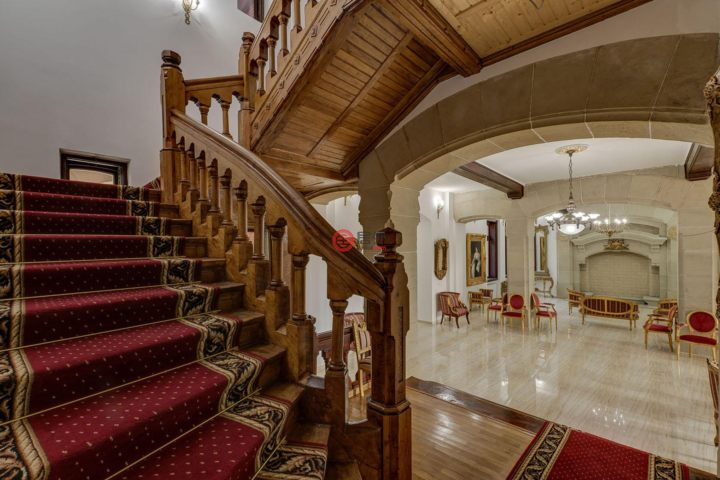 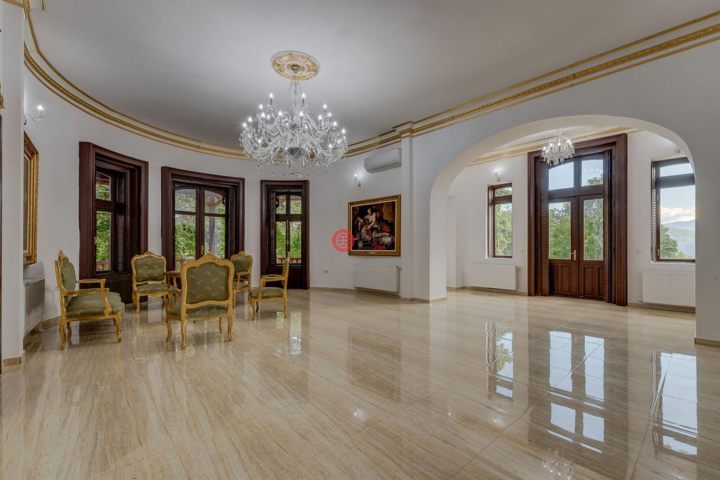 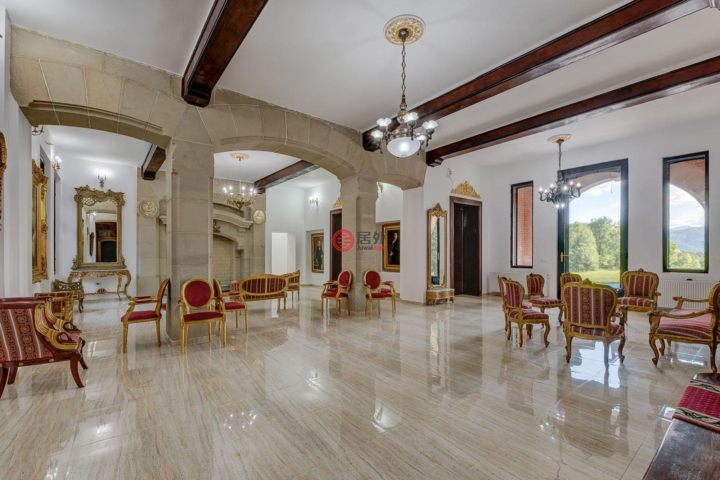 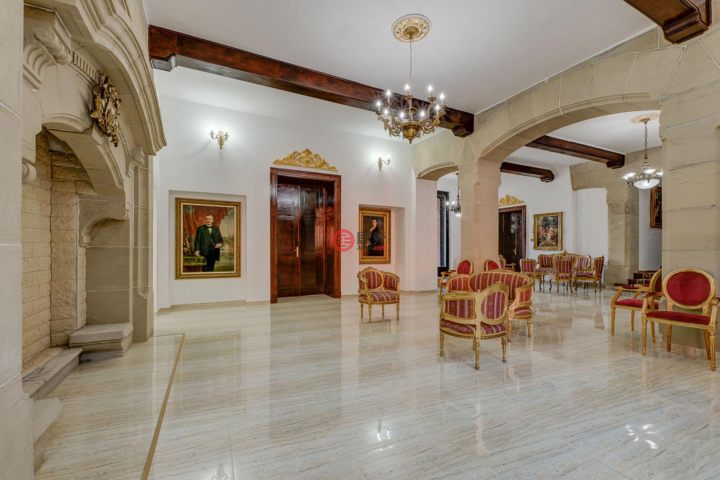 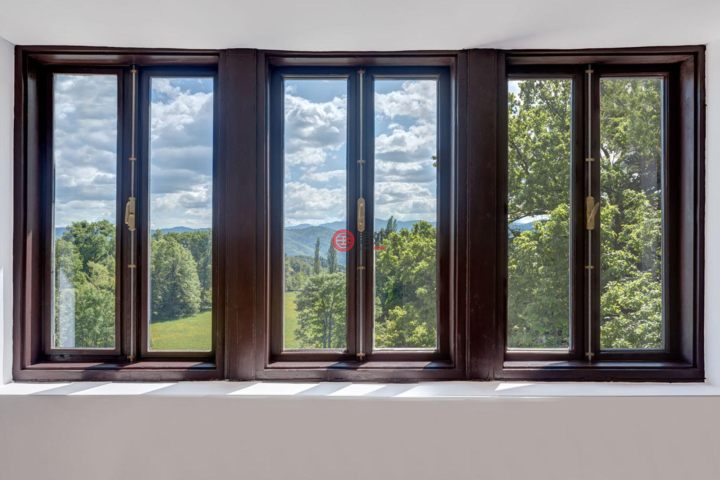 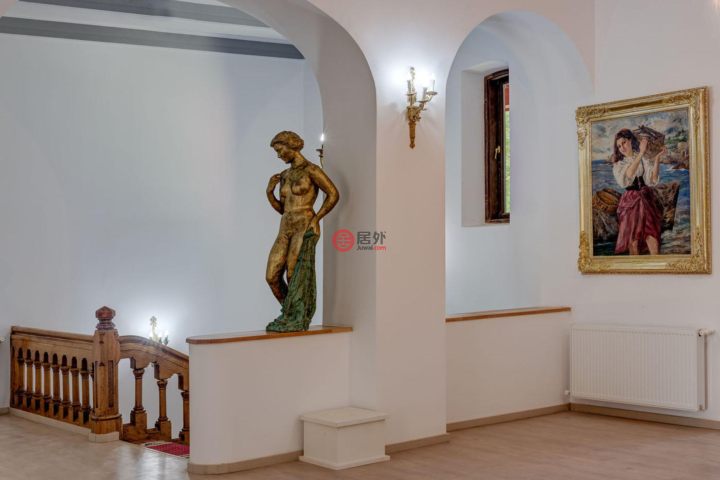 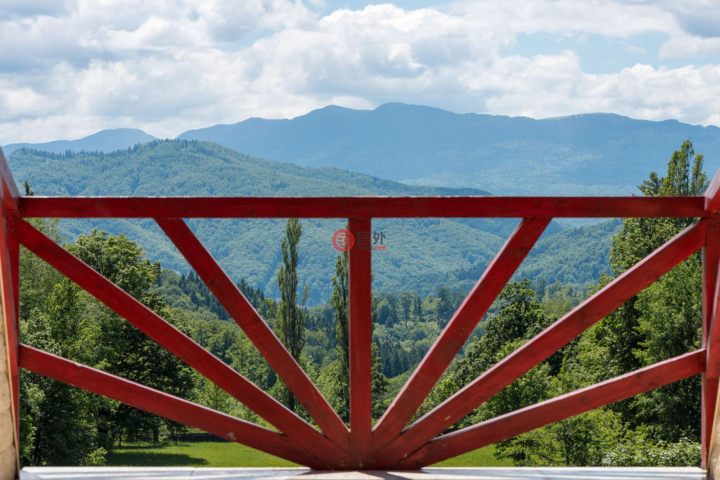 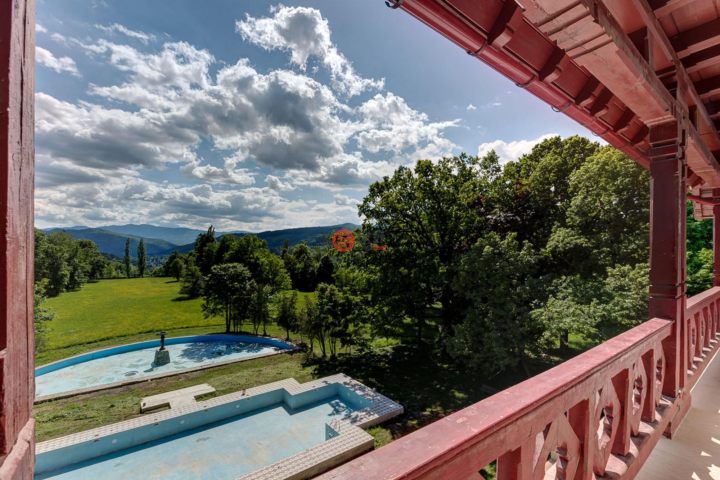 The year of construction isn’t precisely noted, most likely being somewhere between 1913-1914. Situated on a highland at 600 m altitude and integrated in the picturesque landscape, the Stirbey Palace was designed by architect Nicolae Ghika-Budești and built with Italian craftsmen. Architect Ghika-Budești was a promoter of old Romanian architecture, with a personal style, a synthesis between Wallachian and Moldavian architecture. Specific for his constructions are the use of face brick, enamelled ceramic, the insertion of neo-gothic frames at doors and windows, the tower of monasterial inspiration, the horseshoe bow, the "saw teeth" decoration and the geometric motifs.

The Palace from Dărmănești, with a surface of 4500 sqm, is disposed on four levels – basement, ground floor and two other floors, with a semicircular terrace. The annexes occupy approximately 1500 sqm. Water basins were built near the palace, and the buildings had a water supply system that is still preserved, the oldest in Bacău County, where water is brought from the mountain from a distance of nearly 8 km.
Following the early death of Prince George, who lost his life due to typhus during the First World War, Elisabeta will spend most of her time at Dărmănești with her two daughters, Sanda and Marina. „She used to arrive here in May, with her daughters, governesses, chauffeurs and maids; she had an entire team brought from abroad, which included butlers and chefs as well. Until September she received here visits from relatives and friends.”
The Royal visitors at The Dărmănești Palace include Queen Elisabeth of Romania and Queen Marie of Romania, photographed in national costumes in the garden and inside the residence. Queen Marie invokes Elisabeta Știrbey in her notes: "Elisabeta is a beautiful and mild woman, born Băleanu. She has good taste, she likes beautiful things and is a real country life loving woman." Queen Marie records some other details about the residence, with the occasion of her August 1926 visit: "Dărmănești is everything I expected it to be. A house with a beautiful position and a splendid garden, designed with perfect taste and concept. It has something that I have never seen before which is fantastic, enormous flower beds, almost like fields of garden mistletoe, hundreds and hundreds of flowers in huge groups, absolutely gorgeous and also its home is full of flowers arranged in large vases, pots and cans. Nothing can be more spectacular [...] The house is also beautiful and well designed.”
The rehabilitation and restoration started in 2014 and the process took three years and sought to restore and preserve as many original items as possible. The solid wood stairway was kept – every square inch was cleaned and restored. The original solid oak carpentry was saved as well. To meet the current comfort requirements, the glass was replaced with a double-glazed window, but the original oak wood frame was preserved. The total of over 1000 windows have been refurbished one by one. It was possible to preserve and restore the Italian-style steel shutters (unique elements in the country), which had the role of protection in case of a siege. These were cleaned and painted. The façade is the original one as well – the bricks were refurbished to preserve the particular style of architect Nicolae Ghika-Budești.
The space was furnished with French and Florentine furniture, the paintings exhibited in the palace include valuable works of art from the 17th century, signed by Italian, Flemish and Romanian artists. Due to this great effort, we can today savour a unique piece of jewellery of the Romanian built heritage, ready to start a new journey as a 40 rooms hotel with events, cuisine and spa facilities or as a most exquisite private retreat.